Although in 2011 the web page “unique visits” were down almost 2,000 users we still had over 19,000 unique visitors and they visited the web page a total of over 27,000 times.  The amount of material downloaded was up by 21.4 gigabytes at 70 gigabytes for the year.  For those of you who are like me and not computer geeks, that is a lot of information downloaded.  So either we are putting more information on line or the “hardcore” flood enthusiasts are downloading a lot more information.   The web page continues to be monitored by federal, state and local government entities; colleges, universities and high schools; realtors, consultants, Tribes, lawyers, environmental groups, engineers, the business community and most importantly, you the taxpayer who foots the bill for all the public expenditures of tax money for flood control/flood risk reduction measures including but not limited to study after study after study.  Thank you one and all who take the time out of your busy lives to stay abreast of the flood issue, its history, present and future.

QUOTE OF THE YEAR

Last year we added a new feature to the end of the year Angry Citizen.  It is called the “Quote of the Year.   While we like to think that all the “Quotes of the Month” are worthy, after an extensive review and discussion with my webmaster (my son Josef) we feel that the one quote that stands out would be the following:

“Water is our greatest asset. In that same form, and in the twinkling of an eye, it becomes our greatest enemy. . . . From an unknown period, likely at the turn of the century, when diking was first commenced for the private landowners' immediate benefit to a group enterprise, up to 1947, the districts and/or their individual landowners and farmers, cooperating together, spent approximately two million three hundred fifty, sixty thousand dollars on the dikes. . . . Since 1943 the State, helping Skagit County and these some odd sixteen diking districts and some twenty-five or so drainage districts, we together have spent a million three hundred thousand dollars, making approximately a total of three million six hundred sixty thousand dollars together during this century on these levees from approximately Sterling Bend at Burlington to the mouth of both forks. . . . "Every man is entitled to his own opinion, but he is not entitled to form it on the basis of wrong acts." . . . We are now at a time here when we must decide, do we continue this ineffectual and inefficient method of maintaining a substandard set of works, or stop that type of a program and improve our worth and net assets by doing something that's comprehensive and lasting and not be faced with this annual fear that these substandard dikes are going to be topped, your home lost.”

It is worth noting that the second runner-up was:

“Apathy concerning flood control is a major hindrance in securing adequate flood control devices and regulations in most flood plains throughout the country. Communities are reluctant to spend money on flood control projects until flooding does occur. Then there is a chorus of voices haranguing governmental agencies for more protection. After a time this dies down and apathy again replaces action. . . . It must be remembered that in dealing with a powerful entity like a river every action has a reaction.”

Last year I stated the following:

If I had to sum up the year 2010 with respect to flood risk reduction in two words it would be failure and disappointment.  We seem to pretend issues don’t exist so long as we stick our heads where the sun doesn’t shine and hope they will just go away.  They need to quit acting like small town clown country bumpkin functional illiterate hillbilly hick rednecks that just fell off the cabbage patch truck and realize that the issues don’t just go away and unless 2011 produces an epiphany of thought processes I feel very strongly that we are well on the road back to and will have the same result as in 1979.  (See 1979 Levee Improvement Project Historical Index)

Sadly because nothing changed in 2011 the SCFCZDAC was once again awarded the somewhat less than prestigious “Ostrich Award” for all the same reasons stated in last year's end of the year editorial.  Here is a link to that editorial.  Everything that was stated in that editorial still stands. 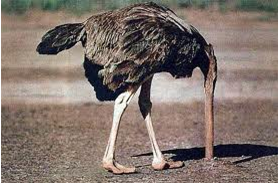 The Flood Advisory Committee only met a very few times and nothing was accomplished at any of those meetings.  The last two meetings barely had a quorum.  The next meeting is in late January 2012 before all the County Commissioners with the sub-committees.   Hopefully the Commissioners will issue a stern demand that the committees either gel and produce a work product within a certain timeline or submit their resignations.  The same goes for the subcommittees.  As I have been stating since 2008, the committee continues to be fractured between the various special interests at the table mostly resembling turf war mentalities instead of a cooperative effort on behalf of all the county residents.  Then there is the issue of telling the truth.  In 2008 we were told that the 3-bridge corridor project involved moving the levees back off the edge of the river.  Two of the dike districts knew at the time that they had no plans whatsoever to remove the current levees.  Failure to remove the levees would put the Dike Districts and the Cities of Burlington and Mt. Vernon in conflict with 44CFR 60.3(c)(10).  The real problem is that as the runner-up Quote of the Year stated, “It must be remembered that in dealing with a powerful entity like a river every action has a reaction.”  Remove the levees and more water goes downstream to Mt. Vernon, leave the levees and more water is stored upstream in the Nookachamps/Sterling/Sedro-Woolley area and more water is forced across Highway 20 into Burlington.  The truth of the matter is that Dike District 12 is responsible for flooding its own district when they changed the natural course of the river.  They can blame the railroad bridge all they want to but the truth is that the bridge doesn’t back up any water due to the scouring effect of the Skagit.  The truth of the matter is it is the location of the levees that is backing up the water.  The truth is what the committee should be dealing with, not the good ole boy political mentality of dancing around the issues by sticking their head into the sand and pretending they don’t exist..  Not the telling of lies.  Not hiding public documents from committee members.  Most importantly not showing any ability to compromise in order to come together as a community.  The committee should learn from the words of Emily Dickinson “Truth is such a rare thing, it is delightful to tell it.”

Sadly, with minor editing the paragraphs I wrote in 2008 are still applicable on this last day of 2011.

I’m almost to the point of saying that if you have to be told what must be done then you haven’t paid attention to any of our history for the last 115 years.   Look people, this is not rocket science.  You don’t have to be a hydraulic engineer to realize that water is wet, it flows downhill and you should not be placing 3 billion dollars worth of urban infrastructure on the bottom of rivers.  This is especially true of volcanic floodplains like the Skagit with two active earthquake faults and two active volcanoes in its river basin.  Is that really so difficult to understand?

Endorsing the raising of any levees in Skagit County is to ignore all of the verbiage contained on this web page (mostly ACOE documents) that states repeatedly that the soils are too soft and too permeable to allow for raising of the levees.  All of the soils in and adjacent to the river are underlain with volcanic soils that are extremely unstable all the way from Hamilton to LaConner.  (See Figure 4 of Report on Mount Vernon Flood Protection Project Geotechnical Assessment, Mount Vernon Washington and Cockreham Island Buy-Out Feasibility Study for lahar soils (Figure 5. Geology).  Building higher levees on these types of soils is a disaster waiting to happen.  Building cities and towns on the bottom of a volcanic floodplain is the height of insanity.

So too is it really so difficult to understand that for the Upper Skagit Valley the only viable project that will help them is a change in the operational procedures of the Puget and Seattle City Light Dams?  Especially since the figures used to calculate the storage behind Ross Dam are figures that FEMA, USGS and the Corps say are not trustworthy.  If we can’t use the figures for computing flood flows why are they viable for computing storage?

Why is it so difficult to understand that the only viable project in the Lower Valley is get the water past the City of Burlington and get rid of it before it gets to Mt. Vernon? This would have the immediate effect of doing away with the floodway designation for those communities and could have the impact of lowering the BFE figures, thus making 100 year certified levees affordable in the future.  To the farming community, if you are truly interested in preserving the farmland legacy of previous generations for future generations the fact that your land is still subject to flooding is your strongest ally.  At a minimum you should be considering overtopping in low areas of the floodplain. If we had this system (including the dam storage we have now) in place since 1924 we would have only had to dump the water once in the last 84 years (which should be another huge red flag on just how wrong the hydrology is).  Once in 84 years is not a bad price to pay for the preservation of the best farmland in America (Source:  9/3/25 Argus).

We also need to address the issue of how are going to fund any project.  There are really only three options.  1) Raise property taxes; 2) Raise the sales tax or 3) keep throwing money at the GI Study in hopes that we could stand in the welfare line behind the $60 billion dollars’ worth of projects already approved in hopes that we could get some money from the federal government in which case we would still have to implement either #1 or #2.  (See Skagit County Public Works: What Will Flood Control Cost? and Plan B Presentation)

If in 2012 we fail to do this, we will make the immortal words of former county commissioner Howard Miller become the prophecy for the future when he stated in 1979, “Nothing will ever happen on flood control in Skagit County until Burlington is washed into Padilla Bay.”  Is that really the legacy we want to leave behind?  Paving over paradise to put up a used car parking lot is not a legacy of responsibility; it is a legacy of greed and selfishness, founded in the “Screw You Jack” philosophy.