Last Thursday, May 24th, I and approximately 200 other Skagit County citizens attended a meeting sponsored by the Burlington Chamber of Commerce, concerning the new proposed Base Flood Elevations (“BFE’s) by the Federal Emergency Management Agency (“FEMA”).  Having participated in the 1981-1984 hearings on the same subject I couldn’t help but think “been here, done this, why are we doing it again?”

Over the last two weekends I have assembled reviewed and organized approximately 65 news articles which describe in great detail what we as a community went through for 3 years over this very same issue (See 1981-1984 FEMA-BFE Flood Research).  Now here it is 2007 and here we go again.

Fears and concerns expressed last Thursday night (i.e. “The new maps will hurt property values”; “The new maps will turn the valley into a ghost town”; “the maps would have a “dampening, smothering effect” on property values and the local economy; (See 5/25/07 SVH) were pretty much what was stated in the early 1980’s (i.e. “FEMA has to power to kill this valley” (See 4/2/82 SVH);…Mt. Vernon and Burlington (will be) cities on stilts, regulations on building renovation projects (will) turn parts of Burlington and Mt. Vernon into ghetto-like areas”, (See 5/4/82 Argus ); “They’re going to turn the lights out in downtown Mt. Vernon.” (See 5/14/82 SVH)

None of those things happened that were feared in the early 1980’s.  So what’s different now?  Now FEMA has a much more sophisticated hydraulic model based on local topography.  Something that they could have done in the 1980’s but “ran out of money” because “spending about $1.3 million for 50,000 people is hard to justify.” (See 11/30/83 SVH)  So here we are some two decades later and another 50,000 people many of which choose very poorly where to buy their homes and set up their businesses and now FEMA has spent the money they should have spent 21 years ago to give us a BFE map that given the parameters of the new process, gives us approximately the same BFE figures the Corps of Engineers gave us in 1974.  This gives a whole new meaning for what goes around comes around.

So what’s wrong with this process?  The FEMA hydraulic study performed by the Seattle District Corps of Engineers is based on flawed data in that it is using the four historic floods determined by Mr. James E. Stewart’s unfinished, based on anecdotal data, highly controversial, not compatible with local history, not able to be duplicated by USGS employees in the 1950’s, 1923 not published until 1961 after he was dead, study  (See James E. Stewart Skagit River Flood Reports And Assorted Documents:  A Citizen Critical Review Whitepaper, Updated and Republished, 7/11/2006).  Although, important to note is that while the use of the Stewart figures are clearly skewing the results needed for a responsible flood control project, the estimated 40,000+ cfs he probably overestimated the flows for the 4 historic floods by, probably when spread out over the lower valley 68,000 acre floodplain would only have a minor effect on the BFE figures.

This is because of the “new” process being used by FEMA.  By taking the right bank (looking downstream) levy and “assuming” it does not fail, and “removing” the left bank levee and running the hydraulic model as if all the floodwater only went to the left side you are “assuming” the entire river is flowing through this area (something that has never happened in Skagit County’s history).  Since the river is being modeled as if the river is flowing overbank upstream of Interstate 5, and the waters have limited areas to go under or over Interstate 5, the map is showing extreme depths east of the Interstate. 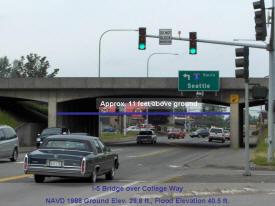 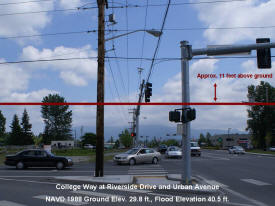 It would seem to me that if the new BFE figures stand that the U.S. Department of Transportation, Federal Highway Administration, and the State Department of Transportation should be held financially responsible for the impacts of the Interstate on flood flows and elevations.  They created the situation that has put us in today’s dilemma.  And then there is the whole “50,000 people weren’t worth getting it right the first time” FEMA Region X blunder.